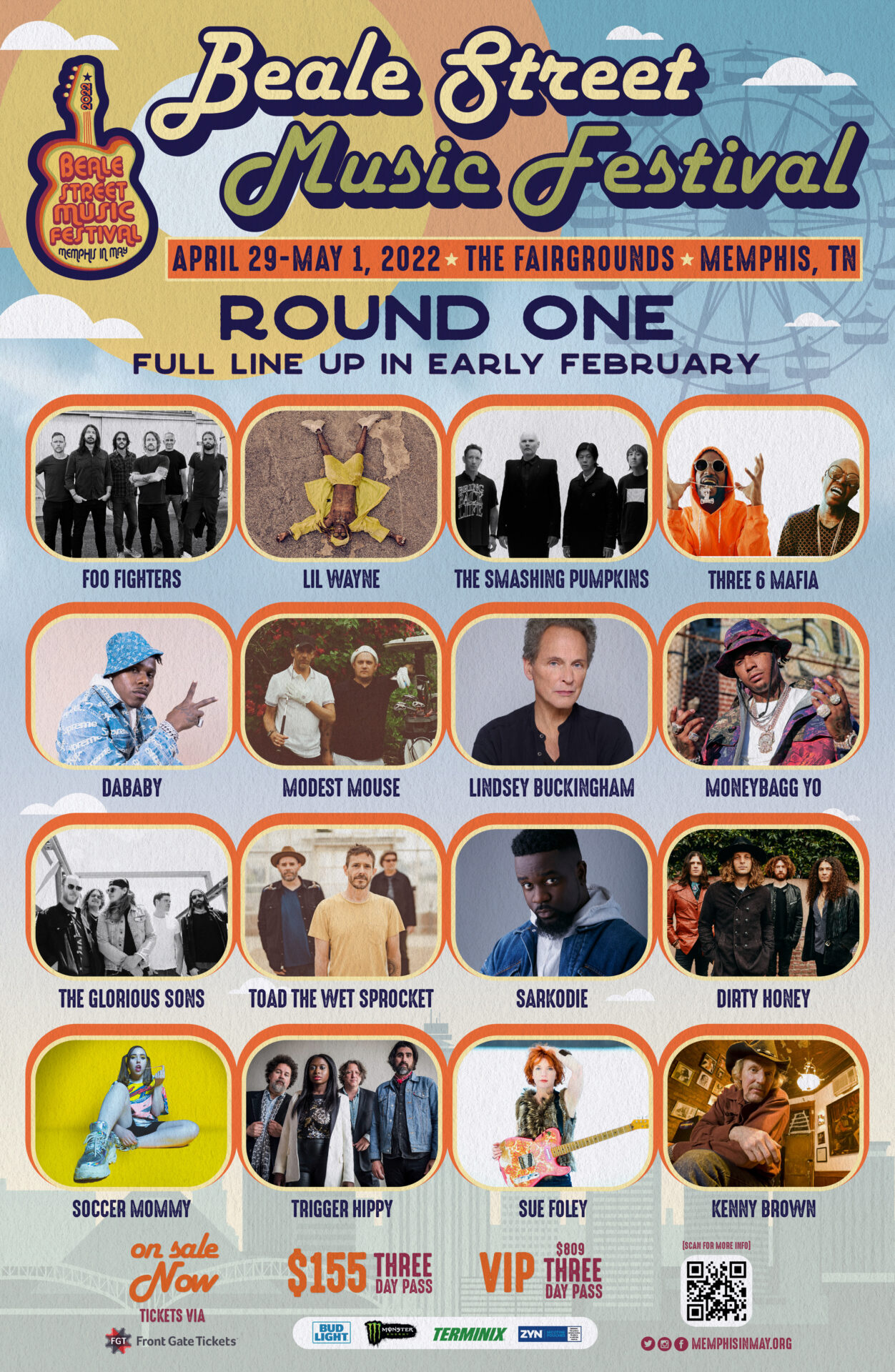 MEMPHIS, Tenn., December 20, 2021 – Memphis in May officials made a surprise announcement of what to expect at Beale Street Music Festival’s eagerly anticipated return in 2022 by announcing a partial list of artists confirmed to appear at the region’s largest music festival. 2022 BSMF announced headliners are Foo Fighters, Lil Wayne, The Smashing Pumpkins, and Three 6 Mafia. Artists announced in the 2022 ‘Round One’ line-up release include DaBaby, Modest Mouse, Lindsey Buckingham, Moneybagg Yo, The Glorious Sons, Toad the Wet Sprocket, Sarkodie, Dirty Honey, Soccer Mommy, Trigger Hippy, Sue Foley, and Kenny Brown. The festival’s entire 60 plus artist lineup will be revealed in early February. 2022 will mark the Foo Fighters’ third headline appearance at the Beale Street Music Festival, having headlined the festival previously in 2000 and 2004. The rock and roll hall of famers last played Memphis in 2018 to a sold-out crowd at the FedEx Forum.

A limited number of three-day passes are on sale at the discounted price of $155*. These limited quantity passes are expected to sell quickly and once they’re gone prices will increase, so Beale Street Music Festival fans are encouraged to buy now for the lowest price of the year. Tickets are available here. In addition to the general admission 3-day passes, VIP passes are also available, which offer exclusive seating on raised, covered platforms with unobstructed views of each stage, VIP-only bars with beer, food, wine, and convenient VIP-only air-conditioned restrooms. Parking options are also available. Three-day VIP passes are $809* (* Plus service charge) and are available at www.memphisinmay.org/bsmftickets

About Memphis in May
Memphis in May is a 501(c)3 nonprofit community-based organization whose mission is to promote and celebrate Memphis’ culture, foster economic growth, and enhance international awareness through education. Founded by racially diverse Memphians in 1977, racial equity and parity are embedded in the fiber and culture of Memphis in May, the official festival of the City of Memphis.
Recipient of 228 prestigious Pinnacle Awards from the International Festival and Events Association, it has been named to Travel+Leisure’s international list of Festivals Worth Traveling For, and in 2018, Memphis topped CNN Travel’s list of international destinations to visit in May because of Memphis in May events. Beale Street Music Festival was named by Oprah Magazine as one of “14 Festivals You Won’t Want to Miss in 2020.”