The information included and linked below was used to solicit proposals from interested developers.
Our efforts yielded 11 proposals to revitalize 100 N. Main and the surrounding blocks. We are currently in the process of reviewing those proposals.

(RFP Process is currently closed)
The Downtown Memphis Commission (DMC), in partnership with the Downtown Mobility Authority (DMA) and the City of Memphis, is issuing a Request for Proposal (RFP) seeking qualified respondents to submit a proposal to act as the developer for the 100 N. Main Street building and the contiguous block bound by N. Main Street, Adams Avenue, Second Street, and Jefferson Avenue. Full details below and here.

100 North Main was once a hub of activity and commerce. It was home to offices, restaurants, service providers.
Its board rooms and dining tables serving as the backdrop for countless deals and negotiations.
The space was unprecedented. Historic. But today it stands empty – ready for its next chapter.

We invite you – to once again – see the promise this property holds. The 100 N Main RFP presents an unmissable opportunity to reposition the tallest building in Downtown Memphis and bring an entire 2-acre site back to life.

By seizing this opportunity, you would be walking in the footsteps of literal giants: Tennessee Brewery and Crosstown Concourse to name just two. Memphis is good at this. We are a city built on authenticity. We embrace history and grit. We own it. We honor it.

This space offers the right developer the chance to capitalize on the rarest opportunity – to rebuild a better version of what stood before.
For far too long, 100 N. Main has sat empty on an otherwise vibrant city skyline – in a prime Downtown location – mere blocks from a world-class riverfront redevelopment project, multiple hotels, restaurants, and the continuing residential growth that fuels the district.

The resurgence of Downtown Memphis is happening. The growth and progress are not slowing.
Now is the time for the rebirth of an icon.

100 North Main. The next new destination.

Downtown Memphis is a vibrant, dense, and highly activated area with the highest walkability score in the region. With $5 billion in the development pipeline, interest and investment in Downtown Memphis continued throughout the COVID disruption, and with the recent completion of key developments, such as the Renasant Convention Center, the area is poised to make a strong recovery.

Downtown is Memphis’ definitive entertainment and dining district and also the economic engine for the greater Memphis MSA and surrounding Shelby County. With nine institutions of higher education, seven hospitals, and multiple arts and community-focused tourism anchors, Downtown is home to the most robust office campus in the region. Amenities include free weekly entertainment offerings, easy access to riverfront and greenspace recreation, and more than 100 live music venues ready for a post-COVID return. With more than 25,000 people living in the Central Business Improvement District (CBID), Downtown maintains a 90%+ occupancy rate for multi-family units despite yearly increases in inventory, with single-family residential numbers also on the rise. (Additional housing data here.) Downtown’s growing residential community fuels the district.

Downtown Memphis is a regional talent hub, with a high percentage of workforce-ready millennials and Gen Z population. It is also home to a growing number of start-ups and entrepreneurs across multiple industries. The buzz created by innovators like Indigo Ag, FedEx, and St Jude Children’s Research Hospital is a steady beacon to those interested in medical, agriculture, and tech. Downtown is becoming their neighborhood of choice, and 100 North Main is a pivotal site in Downtown’s advancement.

The Downtown Memphis Commission (DMC), in partnership with the Downtown Mobility Authority (DMA) and the City of Memphis, is issuing this Request for Proposal (RFP) seeking qualified respondents to submit a proposal to act as the developer for the 100 N. Main Street building and the contiguous block bound by N. Main Street, Adams Avenue, Second Street, and Jefferson Avenue. The selected developer would ultimately own the property, subject to the terms of a development agreement. The DMA purchased the property in March 2021.

The project includes multiple parcels across 2+ acres. The 37-story main tower building was originally built in 1965 and is approximately 579,000 square feet in gross area. As an office building, the net rentable area was approximately 429,000 square feet. The building was added to the National Register of Historic Places in April 2015. The structure has remained vacant since June 2014. The overall site also includes four smaller historic buildings totaling around 50,000 square feet, a temporary dog park, and a surface parking lot.

The 100 N. Main site is a prime redevelopment opportunity in the heart of Downtown Memphis. The property is well-positioned on the Main Street Pedestrian Mall near the Memphis Civic Center, along the Main Street Trolley Line, two blocks south of the newly renovated Renasant Convention Center, and a short walk from a connected system of riverfront parks running along the Mississippi River. 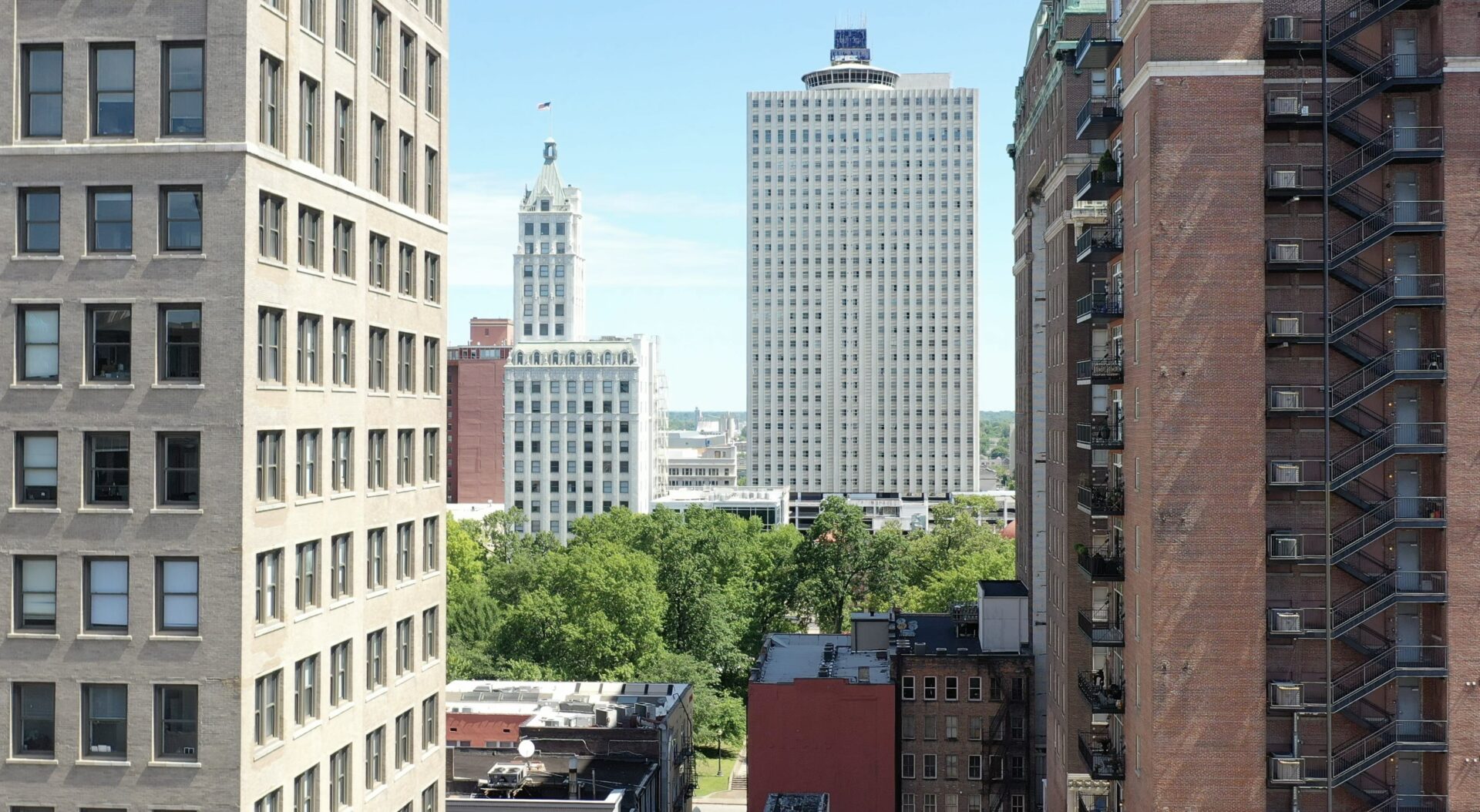 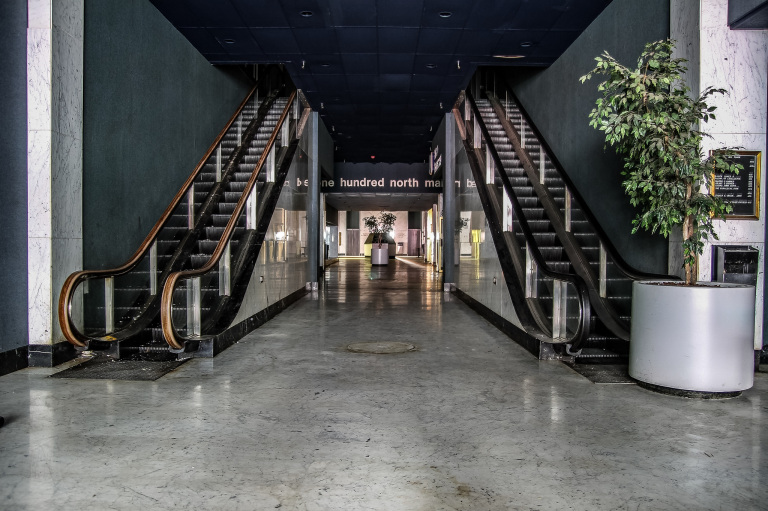 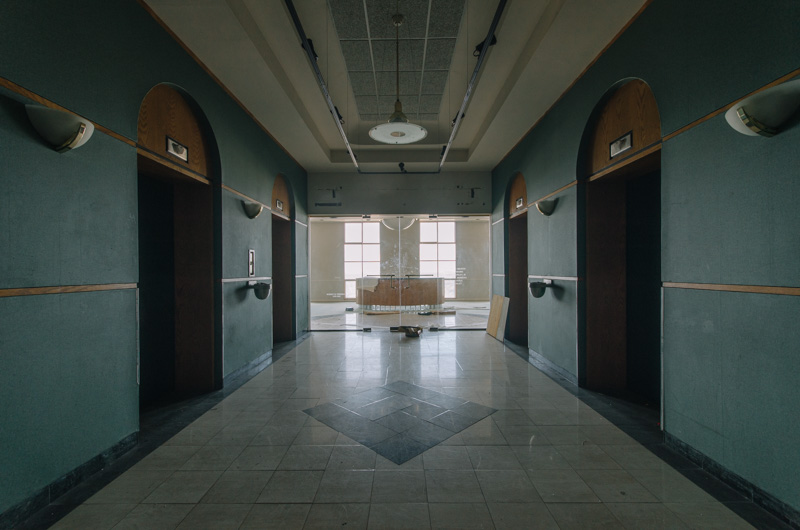